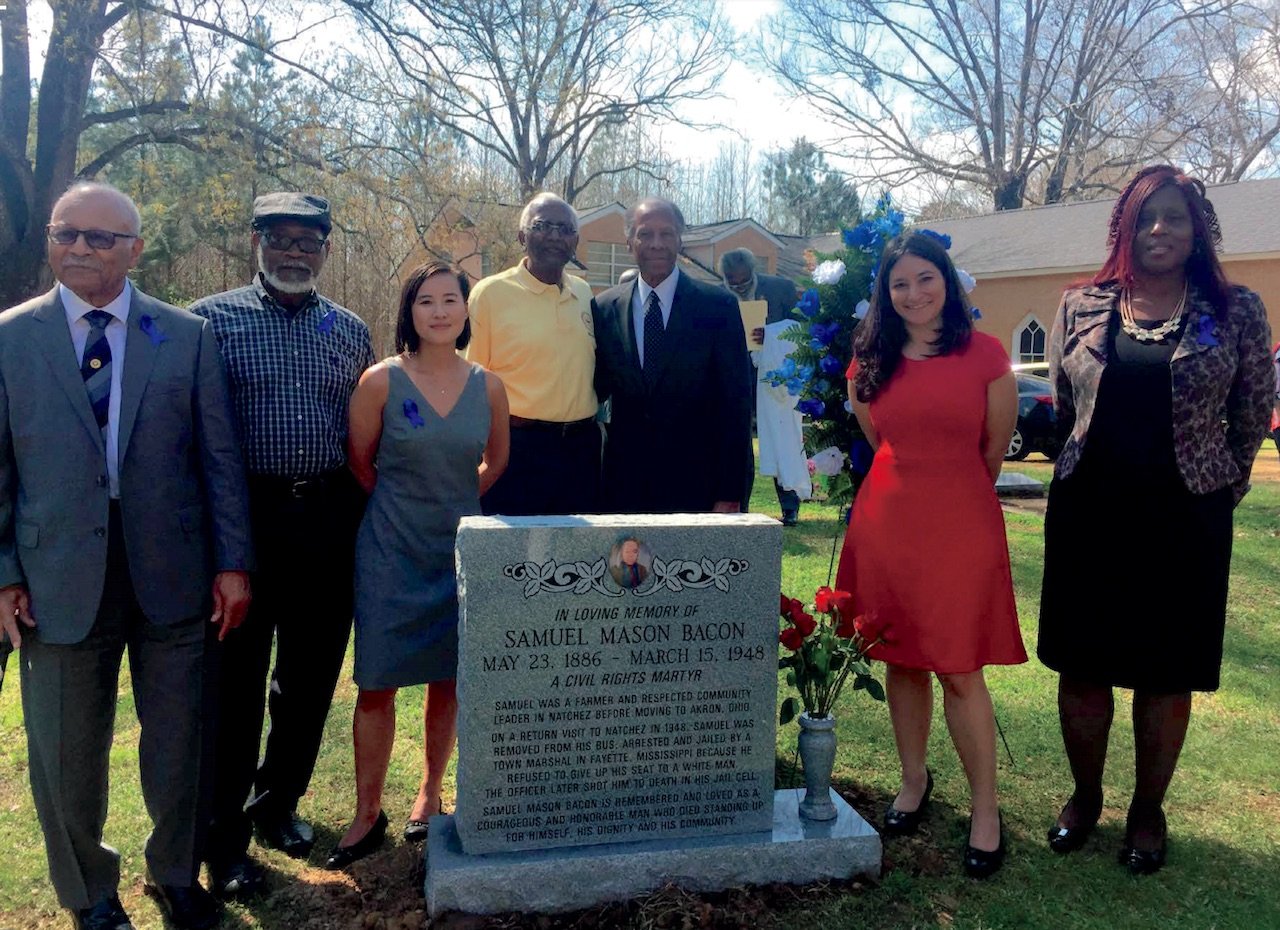 Samuel Bacon was born in Natchez, Mississippi and worked most of his life as a farmer. He later moved to Akron, Ohio to join his daughter and to work in a rubber factory. On March 12, 1948, Samuel Bacon, 61 years old, boarded a bus in Akron, Ohio to visit relatives in Natchez, Mississippi. In Port Gibson, just 42 miles from his destination, he was ordered to give up his seat to a white man. He refused. At the next stop in Fayette, the bus driver had him arrested. He was taken into custody where he was twice shot and killed by Town Marshal Stanton D. Coleman.

I, Londell Eanochs, by virtue of the power vested in me as Mayor of the City of Fayette, do hereby recognize the injustice done by then Fayette Police Department and to acknowledge and give a formal apology on behalf of the city of Fayette.” 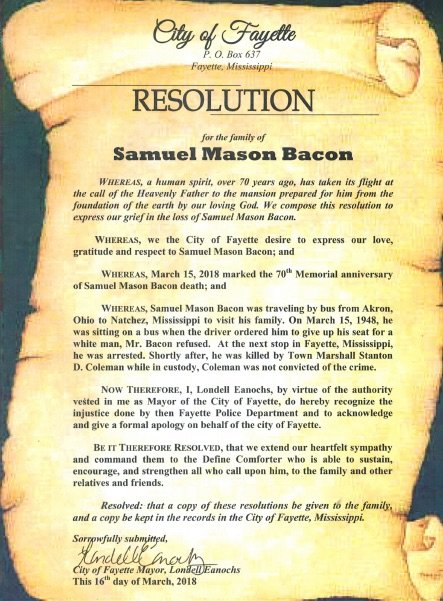 On March 15, 1948, Fayette town marshal Stanton D. Coleman shot and killed Samuel Mason Bacon, 61-years-old, in Fayette, Mississippi. Bacon grew to adulthood in Natchez, Mississippi, where he was a farmer and community leader.

While he was relatively content in his hometown, his wife, restless during the war years when money was to be made in the cities, left Mississippi for Fairfield, Alabama, and one of Bacon’s three daughters moved to Akron, Ohio. Eventually, Bacon closed down his farm and joined his daughter in Akron, where he took a job at the Firestone Rubber Company. In March 1948, Bacon took a trip back to Natchez. When the bus arrived at the small town of Port Gibson, 42 miles from his destination, the bus driver told Bacon to give his seat to a white man and stand in the colored section at the rear. With white seats still available, Bacon said he would not do so. At the next stop, which was Fayette, the bus driver, threw Bacon off the bus and had him arrested for “creating a disturbance.”

Held overnight in the Fayette jail on charges that have never been revealed, Bacon was found dead in his cell on the morning of March 15, three days after he had left Ohio. Coleman had shot him at close range in his cell, once in the stomach and once in the chest. Coleman claimed he shot Bacon in self-defense when Bacon lunged at him with an axe that had been left in his cell.

After many protests by family and civil rights groups, Mississippi convened a grand jury. In September 1948, the grand jury declined to indict Stanton Coleman, partly based on the testimony of Bill Gray, a 70- year-old black janitor who worked at the jail. The Department of Justice took no action in the case. The investigating FBI agent was George A. Gunter, who would later go to work for the Mississippi Sovereignty Commission.

Photo 2: Attendees at the Natchez Museum of African American History and Culture

Photo 3: The new Samuel Bacon Exhibit at the Natchez Museum of African American History and Culture