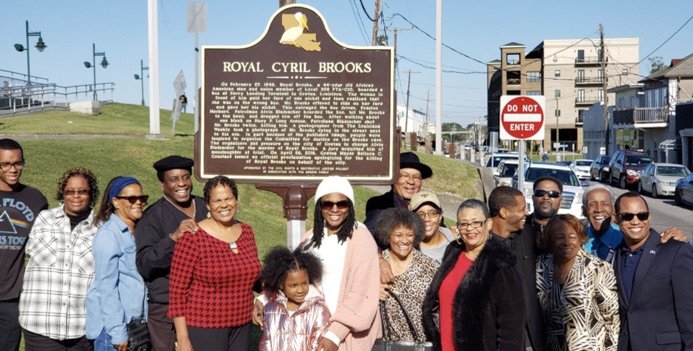 On November 9, 2019, the family and descendants of Royal Cyril Brooks, in partnership with CRRJ, unveiled an historical marker in his honor. The State of Louisiana approved the marker for installation near where 44-year-old Royal Brooks was unjustly killed by a Gretna police officer on February 27, 1948. Community members, public officials, and media attended the ceremony.

Roy Leo Brooks Jr. and Ira Brooks, both grandchildren of Royal Brooks, unveiled the marker at the Ferry Landing Terminal in Gretna.  It was there that Royal Brooks was taken off a bus by Patrolman Alvin Bladsacker after he offered to trade fares with another passenger. Bladsacker struck Brooks in the head with his gun and shot him twice, killing him in broad daylight. Bladsacker was indicted by a grand jury but acquitted of the charge at trial.

The marker represents a significant step in the racial history of Gretna. It is said to be the first marker honoring an African American in the city. It follows upon a public apology issued in April 2018 by Mayor Constant and the unveiling of a gravestone in his honor.

Photo 3: On Saturday, March 6, 1948, The Louisiana Weekly featured the murder of Royal Cyril Brooks by Patrolman Alvin Bladsacker in Gretna. Royal Brooks’ son, Roy Brooks Jr., sits next to his father’s body as a crowd gathers. The Civil Rights Congress, the Local 309 of FTA-CIO, and African American newspapers, including The Louisiana Weekly, were pivotal in getting a murder charge before a grand jury.