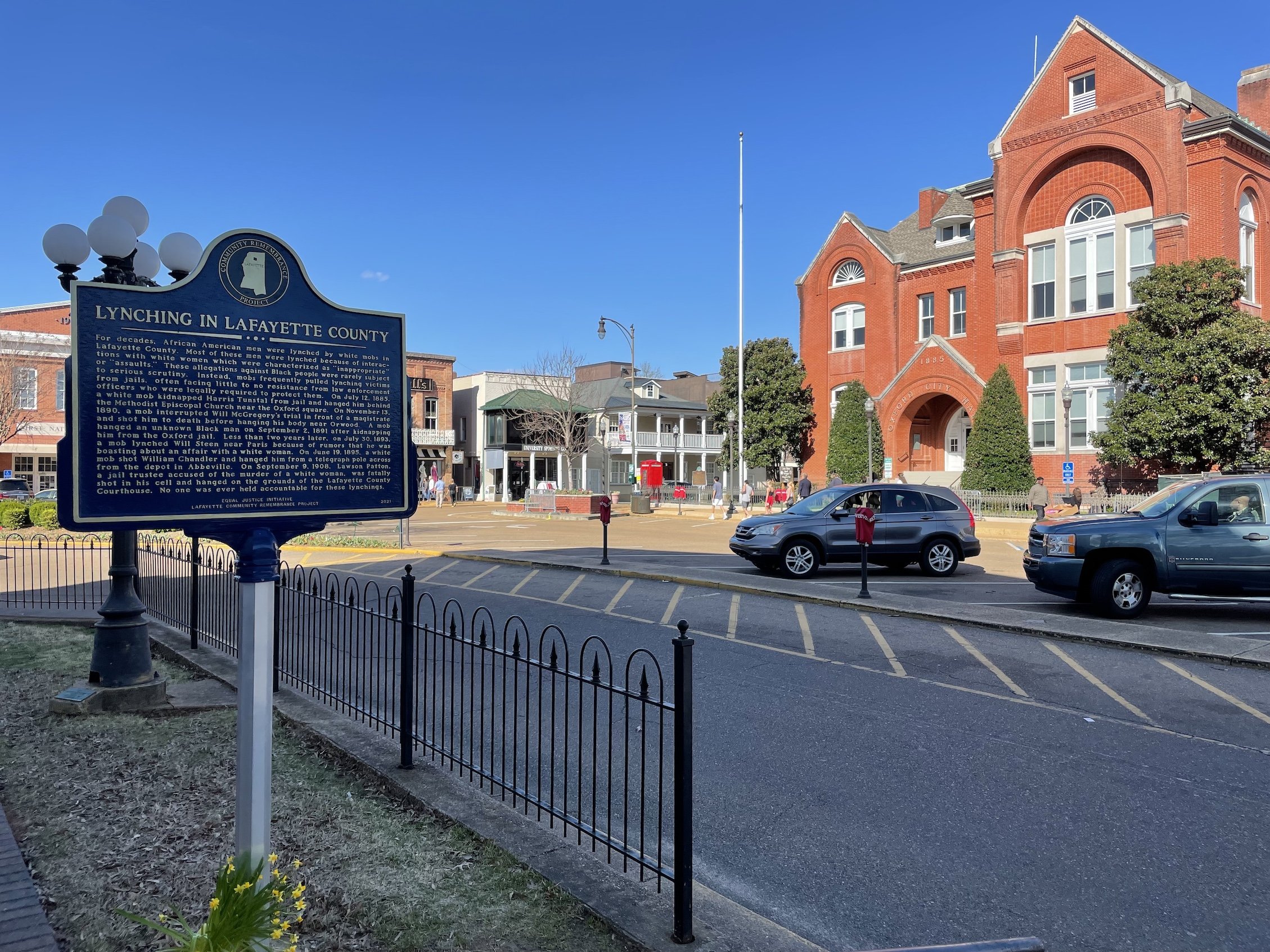 On April 2, 2022, CRRJ affiliate Professor Diane Harriford of Vassar College and former CRRJ clinic student Kyleen Burke attended an event in Oxford, Mississippi honoring the lives of seven African-American men who were lynched in Lafayette County over a 50-year period.

William Chandler, Elwood Higginbottom, Will Jackson, Will McGregory, Lawson Patton, Harris Tunstal, and Will Steen were accused of crimes and lynched without being given a fair trial. They were taken from police custody, attacked and killed by white mobs, often with little to no resistance from law enforcement.

None of the perpetrators were held accountable for these lynchings.

Victims’ descendants, community members and guest speakers gathered in front of the Oxford City Hall for the dedication of a memorial marker located on the Courthouse lawn. Representatives from the Lafayette Community Remembrance Project, the Equal Justice Initiative of Montgomery, Alabama, the University of Mississippi Choir, and CRRJ attended and spoke at the event. The community came together through songs, prayers, speeches on racial injustice and reconciliation and commemoration for the victims and their families.

Four days before the dedication event, the Emmett Till Antilynching Act was signed into law, making lynching a federal hate crime.

In 2016, Burke, a former student at the CRRJ clinic, where students investigate racially motivated homicides, investigated the case of Elwood Higginbottom during her second and third year of law school at Northeastern University. She got in touch with Higginbottom’s grandson, Tyrone Higginbottom, and they met in person in Memphis, where he put her in touch with other family members and with the Oxford community.

“It was extremely humbling to see the direct connection this incident of racial violence had on this family having to be uprooted, losing property they had in Lafayette County, and having to start over again in a new place and the impact that has had on subsequent generations,” Burke said. “Seeing that connection first hand has been really informative and has definitely had a huge impact on my understanding of this country.”

Burke’s investigations put together an account of the story of what happened to Higginbottom in a way that wasn’t previously publicly available and wasn’t known to his family or to the community in Oxford and sparked efforts by other community groups to research victims of lynching in Lafayette County.

Following the marker dedication, the group also held a dedication of a bench in a local park honoring the memory of Higginbottom’s son, the Rev. E.W. Higginbottom Sr., who passed away in 2020.

“The Higginbottom family was there and they expressed how this process has allowed them to reconnect with branches of the family that had been disconnected from one another,” Burke said. “And I think it’s been a powerful experience for them, but it’s also been an extremely powerful experience for everyone who’s gotten to meet them through this process because they are incredible people.”