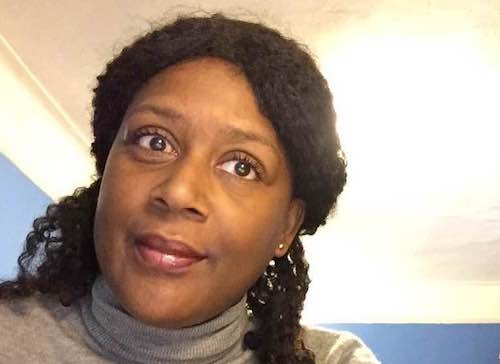 In Memory of Tara Woods Turner

We are sad to announce the passing of Tara Woods Turner, a friend of CRRJ and a descendant of Neal Wood, who was married to Laura Wood, a victim of lynching in 1930 in North Carolina.

Turner’s relationship with CRRJ began in 2018 when clinic student Keren Salim interviewed her about the Laura Wood case. Turner herself had discovered the lynching of Laura Wood while she was working with her uncle on genealogical research about her family history.

A prolific writer, Turner was deeply passionate about researching, honoring and remembering those killed by lynching and other forms of racial violence. She was committed to building community and spaces where descendents could come together and share their stories, share their vision, connect and heal in a space that is designed by descendants themselves. She was dedicated to her family and to ensuring that they were all aware of the tragedy in their family history and that as many as possible were educated about historical harms.

“She had a real thirst for knowledge and understanding,” said Evan Lewis. “We were always talking about books she was reading and she had a real passion for history.”

In 2020, Turner and Lewis, the great grandson of Lent Shaw, a victim of lynching in Georgia in 1936, helped CRRJ to organize the Lynching: Reparations as Restorative Justice conference, which brought together descendant families, longstanding leaders of U.S. reparations movements, racial justice activists, and scholars to discuss avenues for compensatory reparations and other forms of individual and community repair for the descendants of lynching victims.

Turner and Lewis then went on to develop the Legacy Coalition, a nonprofit organization that is designed to advocate on behalf of descendants and families of victims of racially motivated violence. “Tara was instrumental in all the work that we’ve done up to this point,” Lewis said. “She was a partner in terms of designing the organization and thinking through what the organization would look like long term. She was fully committed to the endeavor and gave her time and herself and her vision to push us to this point.”

Turner was committed to ensuring that descendants have a voice in determining what repair looks like and that families and descendants advocate for repair. She helped the Coalition’s work in defining how repair would manifest itself in the real world.

“She was adamant that there should not only be financial resources to that repair,” Lewis said. “But there should also be components of healing that will ensure that families not only receive resources as a means of recompense but also receive the therapeutic care that is often necessary in the aftermath of these tragic events, even generations removed from the events themselves.”

“Tara’s just an incredibly warm, kind, giving soul,” Lewis said. She was the type of person that sought to build meaningful relationships with all members of the organization and offered her time to help older members deal with the technical challenges during the pandemic.

“It is my hope that decades from now, the Legacy Coalition will be an organization that is still around and continues to do good work advocating for families [of descendants],” Lewis said. “And a lot of the positive work that I hope we will do is directly attributable to Tara. Oftentimes people get lost in history, and we’re all interested in ensuring that that does not happen with Tara because she’s been such an instrumental player in all the work that we’ve done thus far.”

Margaret Burnham, CRRJ’s founder and director, added that “This is an inestimably painful loss. Tara Woods Turner eagerly shared her story with CRRJ, amplifying the written record we had amassed with compelling family memories, carried across the generations, of Laura Wood, who met her death at the hands of lynchers in 1930.  Tara Turner helped shape what has become the collective voice of the families: the Legacy Coalition. She was tenacious and she was brilliant. May her memory live on.”