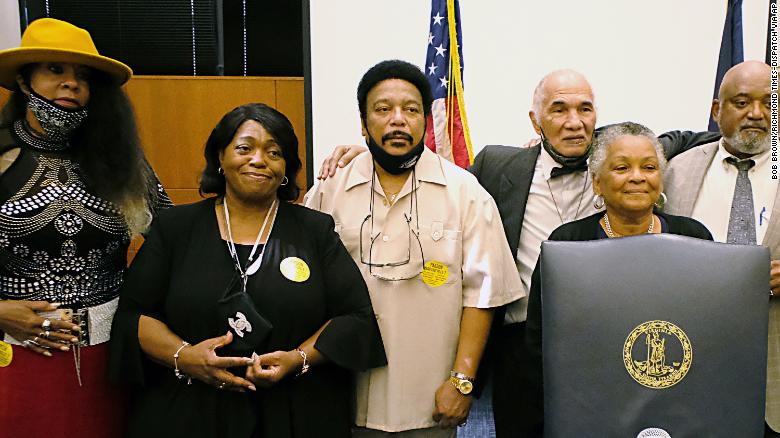 On August 31, 2021, Virginia Governor Ralph Northam granted posthumous pardons to seven Black men: Joe Henry Hampton, Frank Hairston Jr., Booker T. Millner, Howard Lee Hairston, Francis DeSales Grayson, John Clabon Taylor, and James Luther Hairston. The seven, commonly known as the Martinsville Seven, were put to death in Virginia by electric chair on February 2, 1951 and February 5, 1951 after being tried and convicted in an eight-day trial. The men were accused of raping a white woman. All men pleaded not guilty, and the trials were heard by all-white male juries.

Last week, in a room filled with family members and advocates, Governor Northam announced he would be pardoning the seven. The room immediately filled with celebratory applause, cries, and hugs.

“While these pardons do not address the guilt of the seven, they serve as recognition from the Commonwealth that these men were tried without adequate due process and received a racially-biased death sentence not similarly applied to white defendants,” said Northam’s office. The petition argued that race played a pivotal role during the identification, investigation, conviction, and sentencing of the men, and that they were not provided adequate due process “simply for being [B]lack” and were sentenced to death and killed when a white person would not have been given the same fate. As shown by data, from 1908 to 1951, 45 men were executed for rape in Virginia; all were Black men.

A posthumous pardon is a pardon request for a deceased person that was convicted of a crime. While pardons are commonly known and provided, posthumous pardons are less known and sought, but the Civil Rights and Restorative Justice Project (CRRJ) wants to change this. This summer CRRJ’s clinic started investigating the cases of 5 men for which they hope to seek posthumous pardons in the next several months. CRRJ’s founder, Margaret Burnham, hopes these 5 men will be exonerated and join the likes of the Martinsville Seven, the Exonerated Five, Clyde Kennard, George Stinney Jr., and the Scottsboro Brothers. The Posthumous Exoneration Project is an extension of the work CRRJ is well-known for: investigating cases of racially motivated homicides, unearthing the truth, and paving a way for restorative justice. This is not the first time CRRJ has made efforts towards seeking exonerations. In 2014, CRRJ submitted an amicus brief in support of the court granting Stinney a posthumous pardon.

Although pardons cannot undo the injustice dealt the seven and others many years ago, they serve as a path for healing, as shown by the responses of family members. James Grayson, Francis DeSales Grayson’s son, said: “I’m looking for forgiveness. I want closure. I want them to be able to realize that somebody cares.” Curtis Millner, Booker T. Millner’s cousin, was reported to have said, “I was traumatized by this incident,” and that he was “looking for closure.” Hopefully, in addition to righting a terrible wrong, these pardons will provide healing and closure to these families.