The John Lewis legacy: protecting the right to be free from racist policing 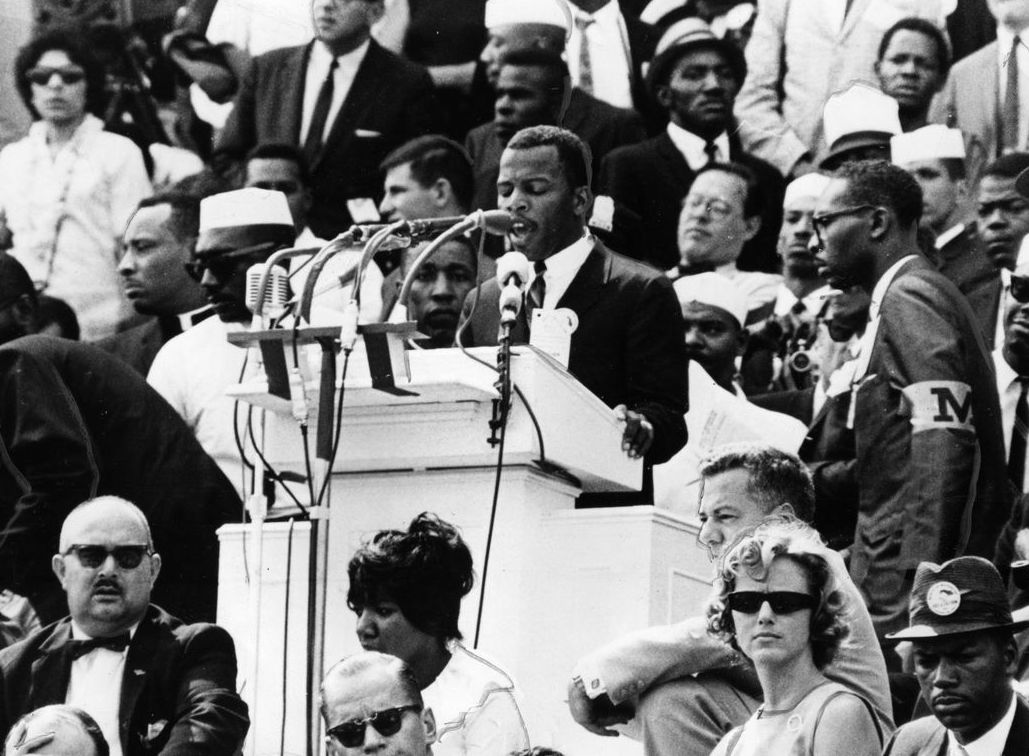 Cover Photo: John Lewis at the March on Washington in 1963. Getty Images.

Today, at the funeral at Ebenezer Baptist Church, Barack Obama rightly heralded Representative John Lewis’ leadership of the long struggle for federal laws protecting the franchise.  The congressman who as a child preached to his chickens was also an early advocate for federal legislation to curb the kind of police violence that has today brought millions of people into the streets.  That piece of his civil rights work is not as well known.  It began with a demand he put to Congress at the 1963 March on Washington.

The Constitution gives Congress the power to pass laws to protect people from racial violence, and right after the Civil War, during Reconstruction, Congress did just that.  To address the reign of terror against the newly freed communities, Congress adopted a set of civil rights laws known as the Enforcement Acts.  One statute made it a crime for private parties to conspire to violate constitutional rights, and a second one subjected to criminal prosecution public officers, including police, voting registrars, and other agents of the state who violated people’s rights.  Around the same time, Congress also conferred on a private person the right to bring a civil lawsuit against a public agent who violated constitutional rights. This statute made it possible to sue police officers who assaulted people.  But when Reconstruction was abandoned and the Redemption set in, these laws were used so infrequently that they may as well have been erased from the codebook.  Only a few civil suits were brought by private parties due to the expense, and because the hostility of judges and juries made such actions a waste of time.  There were even fewer criminal prosecutions initiated by the US Department of Justice; these, too, were nearly impossible to win in the South.

This legal landscape remained unchanged all through the first half of the twentieth century.  It wasn’t until 1939 that the Justice Department hired lawyers who specialized in these civil rights laws. While the Klan roamed the land and the lynching era roared on during the twenties and thirties, the federal government turned a blind eye, letting the nineteenth century laws gather dust.  Finally, after the Scottsboro Case in the early 1930s brought international scrutiny to “southern justice,” a few federal criminal prosecutions meandered up to the Supreme Court.    In 1945, in the most important of these cases, the Court considered whether an Albany, Georgia sheriff named Claude Screws who tortured and shot to death a black man on the lawn of the courthouse while the neighbors listened could be convicted of violating the victim’s constitutional right to be free from police brutality.  No, Justice Black opined, because there was no evidence the sheriff intended to violate a specific constitutional right to which the dead man, Robert “Bobby” Hall, was entitled.  And so the civil rights criminal law was further interred by an incomprehensible Supreme Court ruling.

Such was the state of affairs when John Lewis and other civil rights protesters in the 1960s confronted dogs, bullets, and bayonets in the Nation’s bus stations, five-and-dime stores, county courthouses, and city streets.  The Reconstruction statutes provided little redress, and Congress, dominated and intimidated by southerners, refused to enact effective remedies.  It was a common consensus that new federal laws were needed if the hegemonic, totalizing state-sponsored racial violence that defined black life, and was so deeply embedded in the social and political fabric, was to be controlled, and if the other constitutional injuries associated with law enforcement were to be addressed. In 1948, when President Truman established the Committee on Civil Rights, he noted that “the Federal Government is hampered by inadequate civil rights statutes,” and Attorney General Clark referred to the Reconstruction laws as a “thin thread” upon which to rest constitutional protections against the KKK and its ilk.[1]  Had the laws been pulled off the shelf and actually applied, a healthy body of precedent could have emerged to govern the field, but that did not happen.  Instead, Congress did not directly address the civil right to be treated fairly and without discrimination by law enforcement officers until 1994.

John Lewis, the youngest of the men who led the 1963 March on Washington, was the only one of the Big Six to demand that Congress enact legislation to control police terror.  Here is what he said:

“It is true that we support the administration’s civil rights bill.  We support it with great reservations, however.  Unless Title III is put in this bill, there is nothing to protect the young children and old women who must face police dogs and fire hoses in the South while they engage in peaceful demonstrations.  In its present form, this bill will not protect the citizens of Danville, Virginia, who must live in constant fear of a police state.  It will not protect the hundreds and thousands of people that have been arrested on trumped charges.”[2]

This “Title III” that John Lewis referred to in 1963 was meant to be part of the bill that would become the  Civil Rights Act of 1964.  It had been kicking around since the first Civil Rights Act of the twentieth century was adopted in 1957, but it was never passed by Congress.

Title III would have cured the deficits in the Reconstruction Era package of civil rights laws.  Introduced in June 1963 by President Kennedy, the Civil Rights bill that was pending in August 1963 addressed the right to vote, public accommodations, public education, discrimination in federal programs, and equal opportunity opportunities.  It did not, however, fix the flaws that plagued the old Reconstruction-era civil rights laws. The bill was finally signed into law in July 1964 by President Johnson.

In calling for inclusion of “Title III” at the August 1963 March, Lewis was referring to provisions that would have conferred on the Attorney General the power to sue state or local officials to protect civil rights, including, for example, the right not to be subjected to police abuse, racist prosecutions, or jury exclusion. Such authority was important because remedies had proved virtually impossible to obtain under the Reconstruction era statutes, particularly in the wake of the Screws case.

The March on Washington was in August 1963.  A month later four Sunday School girls were killed in Birmingham.

Right after the bombing, Title III was added to President Kennedy’s Civil Rights bill.  Had it passed, it would have given the Justice Department a green light to investigate and prosecute state-sponsored racial violence, conspiracies to attack civil rights advocates, racially discriminatory policing, prosecutions, jury selection, sentencing, and prison practices.

When Title III was first introduced in debates over the Civil Rights Act of 1957, the southern congressmen quickly beat it down. Georgia Senator Richard Russell invoked the specter of Reconstruction. The provision, he claimed, was “cunningly designed to vest in the Attorney General unprecedented power to bring to bear the whole might of the Federal Government, including the Armed Forces if necessary, to force a commingling of white and Negro children in the State-supported public schools of the South.” And, he added, it would force “the white people of the South. . . to do away with any separation of the races in any phase of public life.”[3]

Title III faced an uphill battle from 1957 through 1964.  The arguments made by Senator Russell in 1957 were recycled year after year.  But for a short revival after the Sixteenth Street Church bombing, Title III would never get out of the committee rooms.  And consequently, there would never, in the twentieth century, be fully adequate federal laws protecting the constitutional right to be free from racial violence and to equal access to the public instrumentalities of justice.  It was not until 1994 that Congress granted to the federal government the power to initiate civil cases to address police abuse.[4]

One can only imagine how different the law would look today, had Congress heeded the young John Lewis’ demand, in 1963, to adopt “Title III.”  How prescient, and wise, the young man was.