The half was never told: honoring George Floyd 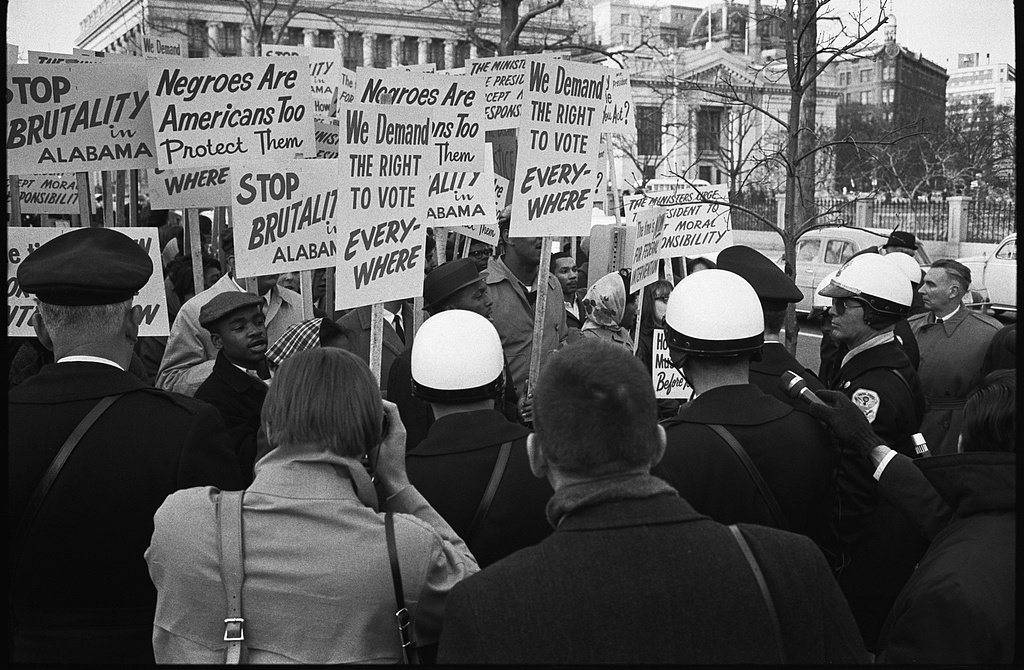 For those who do not know our history well, this past week might seem unparalleled. A public lynching played itself out on our cell phones as we, with him, cried out in agony and anguish.  Our friends, neighbors, and students put on their marching shoes.  Some in their number set our cities ablaze while journalists ducked rubber bullets and the White House called out the cavalry.  To many, the chaos appeared to fall, like the virus, from the sky.

It did not.  CRRJ has for a decade now “said the names” of people slain by police officers during Jim Crow because they were black.  Our files include the name Jesse Thornton, lynched in 1940, because he “forgot” to call a police officer “Mr.” The name Arthur Johnson is there, killed in 1941 in police custody because he could not pay a seven dollar debt. So too, do we have a file for Samuel Bacon, shot to death in a police cell because he would not submit to the back of the bus in 1948. And Hattie DeBardelaben, who succumbed at age forty-five in the back of a police car in 1945; bootlegging was the charge against her. And the returning veteran Timothy Hood, shot to death in the back of a police car because he moved the board separating black and white riders on the bus in 1946. And Moses Jones, killed by a sheriff because he testified against bootleggers in a federal trial in 1953.  And John Jackson, shot to death in a police car in 1941 because he  laughed while lined up with his girlfriend for a movie.  And one of our researchers found files that show that in Birmingham, while about 36% of the population was black in 1948, every one of the sixteen men killed by the BPD in that particularly bloody year was black.

These individuals preceded in death Oscar Grant, Michael Brown, Tamir Rice, Eric Garner, Freddie Gray, Sandra Bland, Pamela Turner, George Floyd, Tony McDade, and Breonna Taylor.  Those who today march for justice for this generation of victims speak as well for those whose cases we have unearthed, those whose bereaved families were left with nothing other than false autopsies, fake police reports, and willfully blind jurors.

Many Americans like to believe that civil rights reforms provided a clean break with histories of violent policing. But our empirical work reveals that the continuities of racial meaning are predicated on historical racial violence.  It demonstrates that the mid-century police violence previously bypassed by historians perpetuated the earlier culture of lynching (in which the police were implicated) and paved the way for the 1960s anti-civil rights assaults of which the lynching of the three Mississippi civil rights workers is emblematic.  The racist violence of these middle decades instantiated lasting norms trivializing black life, legitimating police lethality as a means of social control, and denying legal recourse.  These are the legacies that now in 2020 are on painful display.

Filling in the blanks by “calling their names” deepens our understanding of the latent, long-term environmental consequences of enduring police violence.  One might well ask how a few deaths, brutal though they may have been, could lead thousands of black people and their allies to pour into the streets of so many US cities.  But these protests are as much about the grinding, rampant violence of everyday life as they are about black vulnerability to police murder, and they are about the inextricable structural ties between these two forms of deadly devaluation. The demonstrators want to purge practices of white impunity, loosen the tenacity of white culpability, defy the ubiquity of white privilege, and interrupt the concomitant reiterative resubordination of black people. The protests are about the lingering and still accumulating costs of American racial ideology and the harms ensuing from failure to acknowledge the wrongs, to “call their names.”  They signal a rejection of small-scale reformism, and for those who loot with abandon, they confirm that the marginalized perceive that they have no purchase in a global market where machines now plant, chop, and pick all the cotton, sugar cane, and rice.

Our research also gives us an historical account of black massive resistance against police brutality, from case to case and as a critical component of the struggle for black freedom.  Newark, eerily quiet this week, exploded for four days in July 1967 after a cab driver was beaten by the police. In 1964, a riot in Harlem broke out after a fifteen-year-old teenager was killed by a police lieutenant in front of his school.  Over a thousand New Yorkers clashed with the NYPD’s tactical patrol force and it took four days to subdue the disorders.  Also in 1964, demonstrators seized the streets for three days in Philadelphia over police treatment of a motorist.  Watts burned for six days in August 1965 as crowds seized the streets, looting, burning cars, and confronting over 14,000 California National Guardsmen sent to the neighborhood.  Here again the initial protest was triggered by the beating of a black motorist.  In Detroit in 1967, police confrontations with black residents led to disturbances that went on for several days, petering out when President Johnson sent about 5,000 paratroopers into the city.

A report on these events by the Kerner Commission in 1967 concluded that the riots resulted from the black community’s longstanding grievances against the local police. A poll showed that a majority of whites – 53% – rejected the report’s conclusions that racism caused the riots, depriving politicians of the consensus needed to pursue bold reform. While most of the commissioners were hopeful that some remedial measures would increase black economic equality and protect their communities from police abuse, one member of the panel was less sanguine.  Dr. Kenneth B. Clark noted that he had read reports from the riots of 1919, 1935, and 1943, and could attest that their recommendations were never fully enacted, leaving African Americans to wonder whether their blackness would forever stymy their aspirations and expose them to the brutal whim of America’s local peace keepers.

As Erika Ringstrom reminds us here, tomorrow’s history depends on what we do today.  At CRRJ, that means creating an Archive that will help us understand how in 2020 a cop could nonchalantly strangle a man in full view of multiple video cameras.

I am a PlusOne Master’s student working towards an MA in Public History from Northeastern University where I recently completed my BA in History. I am passionate about expanding history to include the stories of those whose lives have often been excluded from the records in an effort to help us communicate more truthful and inclusive narratives, and hence I am very excited to work with CRRJ for my fieldwork.

As a student of public history, I must acknowledge the decades of evidence showing us that the killing of George Floyd was not an isolated incident. Today we are facing what can feel like omnidirectional challenges, from a global pandemic to continued racial violence from law enforcement. To better understand these challenges, many of us are looking to the past for context about how to proceed. CRRJ’s work provides one resource for understanding our country’s history of racial violence and injustice. The work renders visible for us the similarities between headlines from the 1930s and 2020, and also confirms that we should reject the impulse to conclude that nothing has changed and instead recognize that not enough has changed. History does not move in a straight line towards progress, but thanks to the countless individuals and activist movements our present is better than our past. As my studies in public history often remind me, our action or inaction today determines if our future will be better than our present.

The work renders visible for us the similarities between headlines from the 1930s and 2020, and also confirms that we should reject the impulse to conclude that nothing has changed and instead recognize that not enough has changed.

I am a native of Newark, New Jersey. In July 1967, long before I was born, a rebellion rocked the streets of Newark. The precipitating cause was an incident of police brutality.  A cabdriver arrested for tailgating had been hospitalized after being beaten at the police station. By the time the disorders were quelled four days later, twenty-six people were killed and over a thousand people were arrested.  The riots opened up a window on deep racial disparities in the city.  In 1970, Newark elected its first black mayor. Although black people were hired into the police department, police brutality continued.  In 2016, the Newark police department was subjected to a federal consent decree following a Justice Department investigation into the NPD’s stop and frisk practices.

I attended the University of Bridgeport and graduated with a Bachelor of Art in Social Science and International Political Economy and Diplomacy. I came to NUSL to pursue international human rights law. My objective is to learn to be a strong advocate for those who do not have a voice, and who suffer terribly from human and civil rights violations.

Recent events surrounding the unjust killings of black people including George Floyd has caused deep pain and fear for me personally as a member of the Black community. We should be able to trust that the police are here to protect us, so it is hard to understand how so many black lives have been lost at the hands of the police. I live in fear for my life and the lives of my family members in a world where it seems merely walking outside has become a gamble.

Recent events bring to public light those unjust killings that have been shared thousands of times across media platforms. But there are so many more cases that we do not know about because they were not captured on film. In my work here at CRRJ this quarter,  I will investigate and publicize these unjust killings of the Jim Crow Era.  These narratives will support avenues of restorative justice, and help explain how it is that today police crimes still undermine the promise of equal justice.

I am a co-op student at the CRRJ and a rising 3L at Northeastern University School of Law. I grew up in Bad Axe, MI, attended Central Michigan University for my undergraduate degree in Family Studies and Women Studies and completed my Master of Education at Grand Valley State University. Prior to law school I worked as an LGBTQ domestic violence advocate and co-chaired the state-wide LGBTQ Domestic Violence Coalition. I came to law school because I wanted the tools and knowledge to create a more just world. I am co-oping at the CRRJ because I believe that one of the first steps in creating a more just future is to understand and document our history.

In Boston on Sunday May 31, I attended a march to protest police brutality and the modern-day lynching of George Floyd. The march took a dramatic turn after it ended at the State House. While attempting to leave the protest, I walked towards Downtown Crossing on a small side street where I was met with police violence. Officers dispersed tear gas from one direction and approached on motorcycles from the other direction, trapping protestors with no way out. I ran to a different train station to find it closed yet police continued to beat people with batons although they could not easily leave the area. I watched as hundreds of police officers in full riot gear marched down the street followed by the National Guard. No matter which street I turned down, I saw the police escalating violence and creating chaos. I had to accept that the only way out was through the police, through the violence, and through the chaos. We must confront the history of police violence and murder of black people; the only way out is through.

Facing our Inherited Past: Why Murders ...