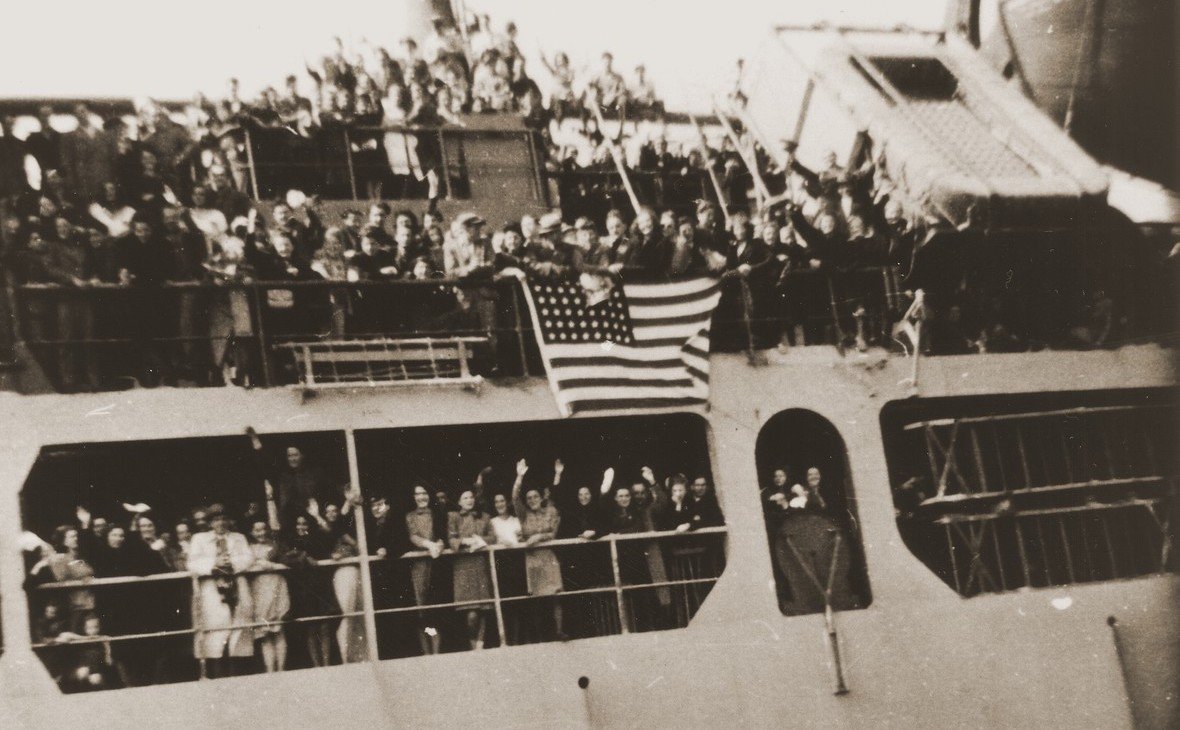 It is now a familiar sight to almost anyone reading this; the torchlit procession marching, with the bright orange glow piercing the night sky.

On September 19, 1947, a 22-year-old woman named Gisela Ingeborg Wermes disembarked from the S/S Ernie Pyle at the Port of New York, amongst a throng of people. She had spent eight days at sea.

The Pyle’s point of departure had been Bremen, Germany, with the ship carrying refugees who qualified for passage under the Truman Directive, an executive order affording priority to displaced persons from territories in Europe under United States military occupation. Between 1945 and 1952, upwards of 200,000 people would make the same journey as Wermes. Over 80,000 of them were Holocaust survivors.

Born in Wuppertal, Germany in 1927, Wermes had witnessed the rise of the Third Reich to power at the age of six. In the latter days of the war, due to its location in the path of advancing Allied forces, around 40 percent of Wuppertal was destroyed by incendiary bombing, resulting in a firestorm, with over 6,500 lives lost.

For most of her childhood and her entire adult life, the Nazi regime was the only system of government Gisela Wermes had ever known.

The prospect of marrying an American soldier, Charles Ray Renfro, transformed Wermes’ future, from a life of rebuilding in the rubble of her homeland to a promising new start in the United States. Now before her stood brighter horizons marked by the opportunity to establish roots in a prosperous foreign land, and forget what was left behind.

Having completed her voyage on the Pyle, her ultimate destination was the home of her fiancé, and the place where she would start the next chapter of her life: the small town of Sandy Hook in Marion County, Mississippi.

In May of the following year, despite the Southern heat of Marion County, a 32-year old carpenter, repairman and war veteran named Hosea Carter was plying his trade in his community, located in the town of Cheraw. Carter’s notable work was fueled by his efforts to support his wife and their four young children. Known as “Shant” to his family and friends, Hosea Carter was known for straight-talking, a quality he would hand down to his children.

On the day of the job, the summer heat forced Carter to break momentarily from his labor and rest. Charles Renfro, the head of the house, was 18 miles north in the town of Columbia, working at the lumberyard of his employer, William Ratliff Prisk. His young wife was home and had opened the door of her kitchen for ventilation, bringing with it the scent of food being prepared.

Whether the ensuing conversation between Hosea Carter and Gisela Renfro concerned one of money for food, or mere pleasantries as they momentarily postponed their tasks, is uncertain. However, the exchange was witnessed by a passing white tradesman, named Jack MacKenzie. Whether MacKenzie traded insults with Carter, or had merely seen him speaking to Mrs. Renfro in absence of her husband, is also uncertain. Nonetheless, in that moment a death sentence was passed.

Within twenty minutes, the time it took for MacKenzie to reach Columbia, Gisela Renfro would receive a concerned telephone call from her husband asking if she had been harmed. Despite her answer in the negative and Charles Renfro’s subsequent request for Carter to be left alone, two full carloads of armed men led by their champion sharpshooter, Prisk, with a reluctant Charles in tow, started off south in defense of Southern white manhood, under pretense of womanhood.

Word of mouth raced steel and rubber, and for a moment the former prevailed: “Shant, they are coming to kill you,” prompted his speeded drive to his sister’s house, where he thought a firearm was kept.

Having barely alighted from his truck at his sister’s home, his pursuers opened fire. Despite his chest catching the contents of a shotgun shell, expertly fired, he stumbled through the house and into the woods beyond.

His pursuers’ search of the woods proved fruitless, but with confidence abound that Carter would not survive nightfall–“Rat [Prisk] got that n****r”– the men retired.

It would be the following morning when a relative of Hosea Carter found his body. He had covered himself in leaves to hide, as he had learned during his training in service of his country.

In the aftermath, Gisela Renfro would be rendered voiceless. Rather, a sensationalist press would paint a picture of a gallant husband and his employer coming to the aid of a “German war bride,” dispensing of a drunk and lecherous “peeping tom.”  A murder charge against Prisk would be brought by Sheriff J. Calvin Broom, and dropped, with Broom remarking openly to the press that the shooting was “what any decent white man would have done.”

Despite this overt acknowledgment and endorsement of Prisk’s actions by the county’s highest officer of the law, the official inquest jury concluded with a timeless vow of silence in defense of the guardians of white supremacy: that Carter had come to his death “at the hands of persons unknown.”

Hosea Carter’s sibling, William, would be found dead shortly afterwards under suspicious circumstances. His second brother, Eddie, fled Marion County. His wife, Earnestine Carter, would be forced to work as a housekeeper for the Prisk family, out of fear of further harm to her own.

The lynching of Hosea Carter would be listed in a single sentence amongst hundreds of names on the Civil Rights Congress’ 1951 petition to the United Nations, “We Charge Genocide”, and then forgotten.

Sixty-six years later, in Chicago, Illinois, two of Hosea Carter’s children would speak at length to the Civil Rights and Restorative Justice Project:

“I remember my father, the day this happened…I was…six years old…”

His children would recall the evenings they endured without him. Up on the hill near Cheraw, they would see tall wooden crosses burning, men in robes, and a torchlit procession marching, with the bright orange glow piercing the night sky.

I remember vividly, being glued to the television screen at the inauguration of President Obama in 2008 as an undergraduate. Racism was dead in America, the cautious declaration arose, and the Double V campaign had run its course.

On August 10, 2015, I disembarked from a flight at John F. Kennedy airport to begin postgraduate studies in the United States.  America had declared it was looking forward, not back, towards a different future and I wanted to share in it.

Just over a year later, in November 2016, I saw the map of the United States bleed red.

In August 2017, I awoke to view broadcasted scenes of carnage and anguish in Charlottesville. I viewed death in the name of white supremacy. And there too, I saw the torch lit procession, and the bright orange glow piercing the night sky.