If it Wasn’t for the Rain 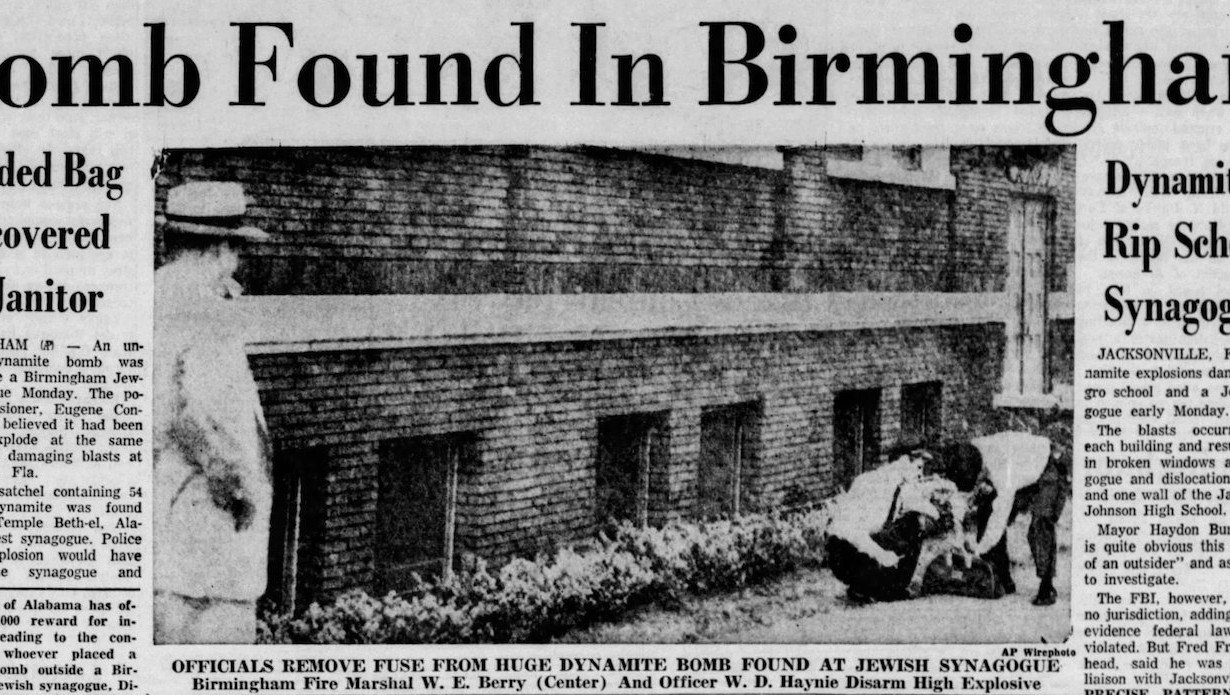 If it wasn’t for the rain that doused the burning fuses, my synagogue would be no longer.

In 1943 my grandfather celebrated his Bar-Mitzvah at Temple Beth-El in Birmingham, Alabama. He opened his speech with the words, “These are dark days for the Jewish people.” Little did he know that fifteen years later, 54 sticks of dynamite would be placed outside Temple Beth-El in an attempt to perpetuate those dark days. The culprit was never identified, although the police strongly suspected Bobby Frank Cherry, the same white man who later murdered four Black girls at the 16th Street Baptist Church. If the rain hadn’t doused the burning fuses then maybe Rabbi Milton Grafman, of the nearby Temple Emanuel, would not have so eagerly condemned Dr. King in a letter to the Birmingham News. Dr. King responded with a Letter from a Birmingham Jail.

Southern Jews played an important role in the Civil Rights movement, as victims, as activists, and as perpetrators. Only by confronting this tripartite existence, in our past and in ourselves, can we confront the inequities of our present. That is why I work for the Civil Rights and Restorative Justice Project.

I never met Bea, but sometimes we visit her on Mother’s Day. She is buried onBirmingham’s Northside, not far from the cemetery where generations of my Jewish ancestors are buried. As the Jews sought a better life on the Southside, where we still live today, Alabama’s Black population flooded the Northside from rural areas. Bea’s family was among them. Bea, Beatrice Cox, was born in 1917 in Mt. Hebron, Alabama. Named for the region where my ancestors prospered in the Judean Hills millennia ago, Mt. Hebron lies on the northern tip of the Black Belt. Bea’s father was a farmer, her grandfather was enslaved. By age eleven Bea found herself a laborer, but in her teenage years the Cox family uprooted to Birmingham’s Northside. It wasn’t long before she was hired by my grandmother.

Dad says he loved Bea so much that it made Bubbe jealous. Bubbe, my beloved grandma, was born poor on Birmingham’s Southside in 1931. Her parents were raised on the Northside, children of Ashkenazi immigrants who settled in an era when the Northside was indistinguishable from a shtetl. Bubbe’s grandmother had witnessed her mother’s murder during a pogrom in Romania. Bubbe’s mother was only a girl when Leo Frank, a Southern Jew, was wrongly convicted for the rape and murder of a young white girl and lynched two years later. Considering her humble beginnings, I often wonder why Bubbe paid Bea so little, or allowed Bea so little time to spend with her own children. My Dad remembers riding on the back of the bus with Bea as a young boy, but we speak more about Bea’s famous fried chicken and mashed potatoes than we do about her plight, or the plight of her children. I wonder if Bea’s son would have still been imprisoned had his mother not been raising my Dad. I wonder if he has contempt for my Dad. I wonder if he has contempt for me.

In a roundabout way, it was Bubbe that led me to the Civil Rights and Restorative Justice Project. When I was a child my grandma used to take me to visit the Old Jewish Cemetery on the Northside. She would introduce me to her ancestors while I collected their vital data with pen and paper. As my genealogical skills grew, so did my passion for social justice. Each time I visited the cemetery I reconciled with its surroundings, the place where my ancestors lived and where Bea’s posterity live today. I can’t help but feel that our past and present are intertwined, that I continue to benefit directly from the privileges my father was afforded at the expense of Bea’s children. I can’t help but feel that I might not be here today if the rain hadn’t doused the burning fuses. My primary job for CRRJ has been to track down the descendants of victims and perpetrators of Jim Crow era violence. Each descendant I find is one step closer to finding the victims, activists, and perpetrators in my life and in myself.