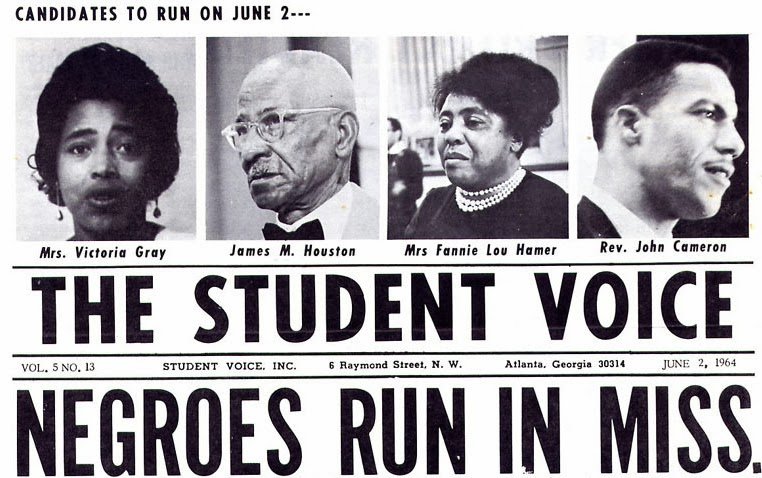 On June 5, 1964, a few weeks before the murder of Michael Schwerner, James Chaney, and Andrew Goodman in Neshoba, I sent my mother a letter from Jackson, Mississippi.  With other staff members of the Student Nonviolent Coordinating Committee, I was preparing for the launch of our Freedom Summer Project that would bring hundreds of college students into the state to help register voters, run Freedom Schools, and pry open the Closed Society. Our office on Lynch Street, a glass storefront, was hectic and tense. “Two nights ago,” I wrote, “we got all of our front windows broken again, second time in three days.  We were all in the office and one girl got hit kind of bad with a brick.  The solution we arrived at was to plywood up the whole front of the windows. . . but we haven’t gotten around to it yet, and people have to stay up all night in the office because there is no way of locking it.”

It was pedestrian and quotidian, but those are the seeds from which history sprouts, and that is the history that, presumably, the Mississippi Civil Rights Museum seeks to capture and honor.  It is a history Trump, he who worships at the altar of Charlottesville’s statue of Robert E. Lee and who loves the amazing things Fred Douglass is doing, will brutalize, deform and defame on Saturday when he attends the opening of the museum. It is likewise a history that is not for sale.  Not for sale because the voice of Fannie Lou Hamer soars higher than that of Mississippi’s Governor Phil Bryant.  Not for sale because the blood of George Lee (killed for voting, 1955), Lamar Smith (killed for voting, 1955), and Herbert Lee (killed for voting, 1961), seeping out of its doors and into the streets, cannot be contained in this or any other museum.  Not for sale because just a few years ago a 48-year-old black man named James Craig Anderson was murdered in a parking lot in Jackson by the (ideological) children of the children of the children of Thomas U. Sisson, who in 1920 told his fellow congressmen in Washington that “[a]s long as rape continues lynching will continue. For this crime the South [will] administer swift and certain punishment. . .” and of Governor James Vardaman, who declared that “every Negro in the state will be lynched” if necessary to “maintain white supremacy” and whose name until only a few months ago graced a building at the University of Mississippi, which banned Medgar Evers (he for whom the state named its airport) and Clyde Kennard.  Mississippi may be changing, but the invitation to Trump shows just how challenging it is for some in the state truly to confront history.

Trump’s visit to the two museums opening in Mississippi tomorrow on the occasion of the state’s bicentennial is an abomination on two fronts.  First, while its stated aim is to foster racial unity, the Civil Rights Museum owes its existence to the fact that this history would be barely visible or at best marginalized in the Mississippi History Museum.  (We are a long way away from “one history, one museum” in our country.)  The Trump visit poisons what should be a moment of deep reflection and celebration for all African Americans, including those, like John Lewis and Myrlie Evers, for whom this history is quite personal.  Secondly, his visit distracts from the important pedagogical work of the museum and instead has one counting the hidden costs of a bricks and mortar memorial project that leaves untouched the damaged lives strewn across the land today in the wake of the racial past.

Civil rights museums are primary sites for the exposition and deliberation of America’s segregated past, including its history of racial violence.  While they properly serve to educate a broader public about forgotten or distorted pieces of American history, they hold special significance for African Americans whose narrative is generally excluded from mainstream museums.  Black interests and collective memory are formed and reiterated in the depictions of subjugation, suffering and resistance to be found in the civil rights museums, which serve as a counterpoint to the dominant narrative.   In taking their visitors along the path from racial subject to citizen, the best of the civil rights museums engage all at once with contested history, civic division, and the false ethos of national unity.  When they explore relatively recent history, these civil rights memorial projects arouse deep passions for the subject communities. (We witnessed a similar phenomenon in the controversy over the multiple and conflicting legacies of World War II in the exhibit of the Enola Gay in the 1980s.)  The Trump visit constitutes a war on black memory: it seeks to strip from African Americans the right to tell their own story in their own time, space, and voice – to each other, to other Americans, and to their posterity.

To be commended are those Mississippians who fought for the creation of the first state-supported civil rights museum in the Nation, for this renders the history “official,” much like a confederate monument.  But as is clear from the Trump intrusion, it also situates the museum in a political space that brings its own pressures to edit or gloss over the story of Mississippi apartheid.  Moreover, many Mississippians pondered long and hard over whether the hidden costs of a state supported project were worth the candle. Acknowledging, as it does, and in some sense atoning for the history of white supremacy, this official memory project also competes with other reparative initiatives – some perhaps more consequential – to include this history in school textbooks, mainstream museums, and presidential speech.  Given Trump’s public statements, behavior, and reputation, there is little reason to believe that the museum’s materials will be used to address the structural legacies of racism that currently confront all Mississippians, the state with the highest child poverty rate and the lowest high-school graduation rate in the country that Trump will make great again. Unless we begin to see the events represented in the Civil Rights Museum as a continuum of meaning rather than a sequence of historical acts that have now been condemned, we will have lost an opportunity.  Trump’s visit starts us down that path.